2017.  Charles Tilly Distinguished Contribution to Scholarship Book Award for Meaningful Resistance: Market Reforms and the Roots of Social Protest in Latin America. Awarded by by the Collective Behavior and Social Movements Section of the American Sociological Association.

2016. Sage Paper Award for the best paper applying or developing qualitative methods presented at the American Political Science Association. Awarded to "Comparison and Ethnography: What Each Can Learn From the Other" (with Nicholas Rush Smith).

My research is motivated by an interest in contentious politics and qualitative methods.  My regional area of expertise is Latin America. I am currently actively pursuing three projects. First, I am exploring state responses to social mobilization by asking questions about why and how states respond the ways they do when confronted by contentious actors. Second, I am interested in the intersection of extractive economies and ideals of plurinational governance.  I am asking questions about how states reconcile redistributive goals, commitments to indigenous autonomy, and legacies of development rooted in natural resource extraction. Third, I am engaged in a project on qualitative methods that seeks to explore two of the most fundamental questions in the study of politics: (1) why do we compare what we compare and (2) how do the methodological assumptions we make about why and how we compare shape the knowledge we produce? I expand on each below.

The book explores the origins and dynamics of resistance to markets through a careful examination of two cases in which social movements emerged to voice and channel opposition to market reforms. Protests against water privatization in Cochabamba, Bolivia and rising corn prices in Mexico City, Mexico offer a lens through which to analyze and understand the mechanisms through which perceived, market-driven threats to material livelihood can prompt resistance. Through exploring connections between marketization, local practices and understandings, and political protest, the book shows how the material and the ideational are inextricably linked in resistance to subsistence threats. When people perceive that markets have put subsistence at risk, material and symbolic worlds are both at stake; citizens take to the streets not only to defend their pocketbooks, but also their conceptions of community.

The research and analysis advances contemporary scholarship by showing how attention to grievances can add explanatory leverage to our analyses of contentious politics. The book also offers insights into a category of phenomena with both historical and contemporary importance—mobilization in the face of perceived subsistence threats.  The core theoretical argument focuses on a particular category of grievances—threats to subsistence goods—and how the meanings these threats take on help explain not only the mechanisms at work in the Bolivian and Mexican cases, but also broader patterns of mobilization and resistance.

I am continuing to pursue these questions, but now through the lens of the state. While the book and related articles ask questions focusing on social movement actors, the current project looks to the targets of a social movement’s claims and explores questions about how and why they respond to social mobilizations in the ways they do.

In this project, I apply the insights generated from the book and related articles—specifically that the meanings with which grievances are imbued shape social movement dynamics—and show how perceptions of grievances shape a target’s response to social mobilization. I contend that a target’s understanding of a social movement’s claims shapes its response, which, in turn, shapes the evolution of the social movement. I make the argument through a careful examination of the Bolivian and Mexican cases that were at the core of the book. In each case, differences in how public authorities understood the movements’ claims helps to explain why they reacted in starkly different ways to the emerging movements. Where officials appreciated the symbolic value of the goods at stake they acted quickly to curtail resistance.  Where officials failed to grasp those meanings, they dismissed the potential for widespread mobilization, and inadvertently accelerated movement growth.

An article from the project, entitled “Targets, Grievances, and Social Movement Trajectories,” was published with Comparative Political Studies in November 2018 (Online First). I am in conversations with university presses about advanced contracts for the book manuscript, tentatively titled Perceptions of Protest: States, Grievances, and Social Movements.


2. Extractive Economies and Plurinational Governance
In this project I explore the legacies of an extractive state on the one hand, and ideals of plurinational governance on the other. I investigate the ways in which the development and exploitation of natural resources by state actors affect possibilities for and conceptions of nation and national belonging. How does the articulation of development priorities that require resource extraction intersect with local conceptions of resource use? How do state commitments to plurinationalism surface throughout these processes? What do these tensions reveal about the meanings that concepts like “development” and “progress” take on in different contexts?

I take up these questions through the lens of conflict over extraction in the Isoboro Secure National Park and Indigenous Territory (TIPNIS) in eastern Bolivia in 2011. When Evo Morales was sworn in as the president of Bolivia in January 2006 he promised to lead a plurinational state that would respect the claims of indigenous populations and respond to the voices of a mobilized civil society. Almost immediately tensions between these commitments and the legacy of development rooted in resource extraction surfaced. Morales proposed the construction of a road through the TIPNIS Park, 80% of which had been set aside and protected as indigenous territory. Social mobilization and direct conflict with the state ensued.  Morales had inherited a legacy of development that would be hard to shed—Bolivia had long relied on its natural resources for economic growth.  Morales’ ambitious plans for social development programs relied on natural gas extraction. Commitments to indigenous autonomy appeared to be odds with these national development goals; Morales did not hesitate to condone violent police raids on protesters and declare the social movement participants to be “enemies of Bolivia.”

It is not surprising that the challenges posed by resource extraction have generated mobilization and conflict in Bolivia and elsewhere. The TIPNIS events offer the perfect lens through which to explore the intersection of multiple and sometimes overlapping national commitments and claims, extractive development projects, and redistributive goals. The conflict shows how plurinational ideals might be difficult to reconcile with the implementation of a resource nationalist development agenda. In the TIPNIS case, the state appears to have run roughshod over local priorities and the cultural logics of indigenous autonomy in the name of national development goals.

This project advances contemporary scholarship by bridging debates on natural resource extraction, nationalism and indigeneity, and the rise of the Latin American left. The project also has important empirical implications for our understandings of how national commitments and social welfare goals shape natural resource policies and conflicts. Struggles to navigate local understandings of territoriality, relationships with natural resources, and state-level development goals are common. These conflicts will only intensify as resources become increasingly scarce and national claims that are no longer tied to a nation-state gain increasing salience.

This project is still in the initial data gathering and theory-building stage. Articles are in progress and I intend to produce a book-length manuscript tentatively titled National Imaginaries and Resource Extraction: Development and Belonging in Bolivia.

3. Rethinking Comparison in the Social Sciences
The methodological challenges posed by my research have generated an interest in and commitment to the importance of qualitative methods. I am now working with my colleague, Nicholas Rush Smith, on a project on qualitative comparative inquiry in the social sciences.  The project builds on previous methodological work, including "Informative Regress: Critical Antecedents in Comparative Politics" (with Dan Slater, Comparative Political Studies), "Comparison with an Ethnographic Sensibility" (with Nicholas Rush Smith, forthcoming in PS: Political Science and Politics), and “Comparative Ethnography” (with Nicholas Rush Smith, under review), but aims to take a wider approach to push the discipline to engage with broad questions of comparison.

This project explores two of the most fundamental questions in the study of politics: (1) why do we compare what we compare and (2) how do the methodological assumptions we make about why and how we compare shape the knowledge we produce? Qualitative comparative methods—and specifically controlled qualitative comparisons–have been central to some of the most influential works of social science. Yet even as controlled comparisons have produced lasting insights and continue to dominate research designs, they are not the only form of comparison that scholars utilize. There is little methodological guidance, however, for how to design or execute comparisons that do not rely on control as a central element. This project aims to reimagine three central components of the comparative method. First, it will encourage political scientists to think critically about what a case is by challenging dominant norms and encouraging scholars to engage with processes, practices, meanings, and concepts. Second, the project will expand our notion of what it means to compare. It aims to push political scientists to conceptualize comparison as a method that includes approaches beyond controlled comparison, including greater attention to the lived experiences of the people we study and the particular ways those experiences re-order social worlds. Finally, the project proposes to expand the explanatory goals of comparative research by de-emphasizing variations in outcomes and opening up variations in political processes, meanings, and concepts.

Even as scholars have developed valuable critiques of controlled comparisons, there has been little work developing alternative epistemologies for non-controlled comparisons. The consequences for knowledge are severe. When we limit the kinds of comparisons that we make, we necessarily constrain the kinds of questions that we ask, and therefore limit the knowledge we produce. This project seeks to systematize how to do alternative forms of comparison. By systematically thinking through how we engage in qualitative comparisons, elaborating why such comparisons should be compelling, and providing scholars with a vocabulary to describe their approach, the project will provide a foundation for expanding the possibilities for inquiry in political science. As a result, the project will not only give scholars additional techniques to advance what know about politics, but also make those techniques more accessible.

Smith and I aim to produce two concrete outcomes from this project. First, we are working on an edited volume will serve as a resource for future students and scholars of politics who are looking to engage in forms of comparison that go beyond controlled approaches. The proposed volume would provide an important complement to works on controlled comparison that currently dominate syllabi. Second, Smith and I would like to create a short-course, entitled “Beyond Controlled Comparisons,” which could be offered in conjunction with the American Political Science Association Annual meeting. The course would serve as an opportunity to present the findings from the workshop and edited volume and encourage graduate students and faculty to incorporate the relevant insights into their research designs and analysis. Ultimately, a shortened version of the module could be considered for inclusion in the Institute for Qualitative and Multimethod Research at Syracuse University. 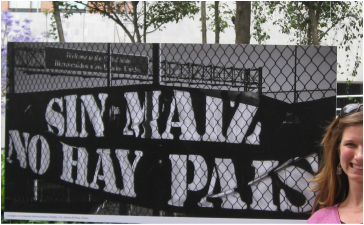